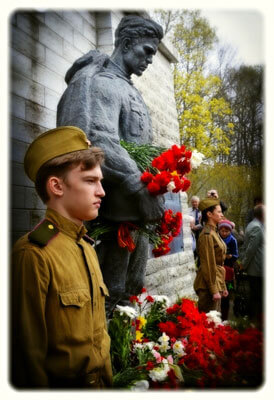 Estonia has always been a really pleasant and quite liberal country to live in. The connection of Russian culture and Estonia dates back to ancient times. The Russians started inhabiting Estonia already in 17th century. These inhabitants have influenced Estonian culture and so today the Russian culture has successfully merged with Estonian and still exists in the country.

Russian culture and language had a significant impact on Estonian language. For example, the Estonian word raamat (book), comes from Russian gramota (which means literacy); Estonian jaam (station) from the Russian jam (no longer used) which used to mean the postal stations where travellers changed horses.

Many famous Russian names are connected with Estonia. For example, the Russian Tzar Peter the Great who dedicated the famous Kadriorg Palace to his wife. Another famous name is Mikhail Dostoyevsky who lived in Uus Street in the old part of Tallinn and also his brother Fyodor Dostoyevsky frequently visited Tallinn at that time. Pyotr Tchaikovski, Igor Oistrahh, Anna Pavlova, Vassili Kandinsky, Vassili Zhukovski, and Nikolai Leskov have visited Estonia as well and even held lectures and concerts here. However, not only Russian celebrities visited Estonia. Many famous Estonians  have actively participated in Russian culture as well. Those who are worth mentioning are: Amandus Adamson, Johann Köler,  Mart Saar,  Peeter Süda, Heino Eller, Neeme Järvi, Ants Laikmaa, Arvo Iho, Kalju Kiisk, Grigori Kromanov, Valentin Kuik, Leida Laius, and there are still many more of them. This proves that the ties between Estonia and Russia have never been one-sided.

When Estonia was under Soviet rule, the new authorities started to force the merging of both Russian and Estonian cultures into one and called it the culture of Soviet people. The Russians started the so called Russification of Estonia and did everything possible to fulfill this aim. After the collapse of the Soviet Union the country regained its independence and so the Russian culture once again became one of the minority cultures in Estonia. Ever since then the two cultures have always been separated from one another (For example, separate Russian and Estonian TV channels.) Today Russians and Estonians live alongside each other. Two cultures still have a great influence on one another: quite a number of Russian children go to Estonian-language schools and many Estonian children learn Russian language in order to have more marketabilities in the future. Unfortunately, we can still see difficulties in communication and co-existence between those two fairly different cultures.