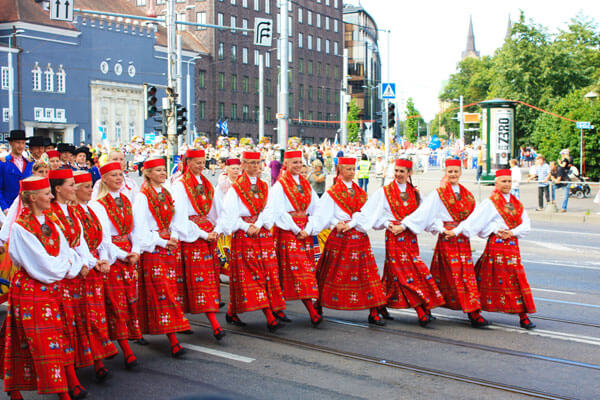 The Song and Dance Festival Grounds in Tallinn (Estonian: Lauluväljak) a real national highlight of Estonia. It is the symbol of the country’s independence and peacefulness. Estonians are a very music-loving nation and you can make sure of it by visiting the Estonian Song Festival, a traditional and very important event which is held every 5 years. Thousands of people gather in one place in order to sing folkloristic songs together; this highly emotional festival is very unique and plays a significant part in local people’s life.

It all started when Estonia was still a part of the Russian Empire. The first Estonian Song Festival was held in Tartu, 1869. Later, in 1896, it has changed its location and moved to Tallinn. Also, the tradition of song and dance festivals got its place in the list of UNESCO Masterpieces of the Oral and Intangible Heritage of the Humanity.

In 1988 Estonians started a peaceful protest action and a massive demonstration against Soviet rule, which is now known as The Singing Revolution. More than 300,000 of people took part in a huge event which was actually a way to lead people to the restoration of country’s independence. The main objective of The Singing Revolution was gained practically without any destructions or victims.