Our Tartu tour will take you to the second largest city in Estonia – the center of science and education. The town of Tartu was founded almost a thousand years ago by Russian duke Yaroslav the Wise. Tartu has been under the power of the bishop, Swedish kingdom, and the Russian Empire. The old, German name of Tartu was Dorpat.

On the hill and surrounded by a wall, we can see picturesque ruins of Saint Peter’s Cathedral. Next to it in the former powder cellar is a pub with the highest ceilings in the world, 7 meters high.

Tartu is the city of monuments. The faiths of so many famous people are affiliated with Tartu, that different statues are everywhere. Scientists who studied or have been teachers in the University, heroes of national legends or just pieces of art created by modern sculptors.

The town Hall Square is beautiful.  A bell on the tower of the Town Hall is playing a melody at midday. Next to the square flows the river Emajogi – the largest river in Estonia.

On the way to Tartu, we will pass 130 km of central Estonian land, discover the history of this part of Estonia, and see the countryside. In Tartu we’ll have a 2 hour guided walk in the city center, which will finish on Town Hall square, you will have 1.5 hours of time on your own to have lunch in one of the cafes or restaurants, and buy souvenirs reminding you of this beautiful town. After that we’ll drive back to Tallinn. 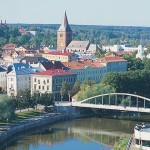 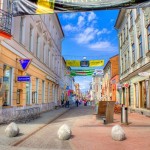 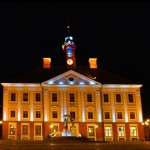